It’s a Sunday, your meeting friends for dinner, where do you go? With so many fantastic restaurants in London you would think this would be an easy question to answer. However when all you want is somewhere super chilled with good food and a few reasonably priced drinks, where does one go?

This was exactly our issue, not being a major fan of burgers and “junk food” I wasn’t completely sold when the hubster suggested the Big Easy. However after suggesting a number of other options, The Big Easy seemed like the easiest option (sorry!).

So on Sunday at 7.45 we rocked up at Maiden Lane and went through the doors into the large slightly industrial looking room.

We were directed to our table and then waited a little while for the menus to appear. When they finally did, they came with a slightly moody waiter. Although the place wasn’t particularly packed, it was fairly evident that they were under staffed and meant that our waiter was rushing around a lot.

We ordered our drinks and had to wait a little while before they arrived. I went for the Orange,carrot and ginger juice with Martel Vs Cognac whilst the hubster opted for the homemade lemonade with Ketal One Vodka. A few others tried the frozen mojitos and other than hubster, we were all fairly satisfied (although mine was the best!!).

When we got round to ordering food, it all got a bit confusing. With a large menu, all on one page, it sometimes leaves you feeling a little lost. We started with two portions of the original voodoo chicken wings:

These were served with a blue cheese dipping sauce (the one on my side of the table had a hair in it, when I gave it to the waiter he simply shrugged and took it away, not bringing a replacement!).

The chicken wings I must say we’re very very good. The outside was very slightly crispy, with just the right amount of sauce. They were so good we ordered a third portion with our main course!

We also ordered the crispy calamari which came with a remoulded dipping sauce.

Crispy calamari is always hard because it generally comes across as greasy and whilst this wasn’t doused in oil, it was slightly on the greasy side.

The popcorn shrimp in my opinion was the worst started. The photo below shows just how greasy it was – really just fried shrimp.

Because we really are a bunch of piggies, we completed our starter cause with the Taste-o-rama.

For mains we decided to keep it simple. Whilst the Big Easy is known for its lobster, I was keen to try the charcoal grilled whole giant shrimp.

To be fair, they didn’t let me down. However the description said they were served with garlic butter and I would have liked a little more of this.

We also ordered the T-bone steak (1000g) with bernaise sauce. 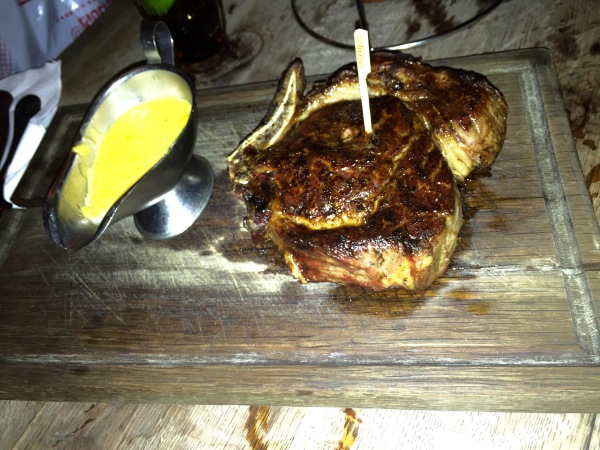 This was soft and juicy – can’t really complain, it was made well!

On the whole, the food was good, the atmosphere was ok and the service wasn’t great – will I return? Not in a hurry!