Last Saturday, Mama Duck Quaks managed to bag two tickets to the VIP preview of the Asiana Bridal Show. Apparently this is THE bridal event to attend, so we were quite excited.

We rocked up at the Lancaster Hotel and made our way through the VIP designers whilst nibbling on Madhu’s specially selected canapés. Some jeera chicken, a mini burger, a dosa and a few pieces of tempura vegetables late, I was craving Indian food.

Neither of us had eaten, so when Mama Duck we try Roti Chai, I jumped at the chance. Those who have been following my blog for some time will know that I very rarely visit Indian restaurants. I have one regular which I go to purely for the grilled meats and other than that, I have a mother that is a fantastic cook so I see no need to go out and eat Indian food.

So the fact that I was happy to go to Roti Chai is definitely something new. We drove over and arrived at the restaurant to find a parking space practically outside the door. It was a sign!

We were seated at our large table by the window and examined the menu. Mama Duck who had eaten here a few times before made a few suggestions and we both decided that the key would be to stay away from fried food.

We ordered our drinks & within no time two delicious Lychee Rose Bellini arrived.

Next on to the food. Mama duck insisted that the Bhel Puri – described as puffed rice mix with tangy tamarind sauce – was really good. I must say she wasn’t wrong, the rice was still crunchy, whilst the tamarind was a good balance of sweet & sour. If I were to be overly critical, I’d say that the dish needed to be left a little longer so that some of the rice is bordering on soggy whilst the rest is crunchy.

Next up was our Bun Kebab – we asked for this without the actual bread. Described on the menu as Punjabi ‘tikki walla’ mini burgers, we were expecting a few small burgers, but instead ended up with one burger on a bed of lettuce.

The meat was extremely well-flavoured & cooked. The sweetness of the tamarind sauce was cut by the tangy-ness of the green chutney. All in all, I was quite impressed with this dish and would probably go back again and order just the burger!

Next up was the Parsi Chicken Farcha. Sadly this is where our pact to dodge fried food came unstuck. The description on the menu had no mention of this being fried and therefore we gave it a shot. What we received were an Indian style chicken nugget which again, I cannot lie, were really well made. 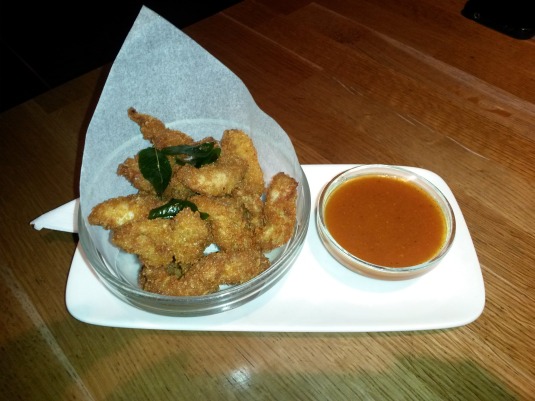 Having eaten a fair bit, we decided on getting just the one main. So we went with the Railway Lamb Curry.

The speed at which this arrived was slightly alarming, but we came to agree that this is likely to be one of the better sellers and given how tender the meat was, I’d guess it is made in big batches and served up over the course of a night. The curry had a truly authentic flavour whilst the potato added to the texture of the sauce whilst beefing up the dish slightly.

The lamb came with two home style roti’s that were the perfect accompaniment to the dish.

All in all, for someone who rarely eats out at Indian restaurants, I was pleasantly surprised at how light the food was at Roti Chai, almost as if I were eating food cooked at home.  It’s fair to say some dishes were ever so slightly better than others, but in reality, this is one place I would consider going back to. The service was quick, the waiters friendly & the space casual but trendy. Definitely one to try!

One thought on “Review: Roti Chai”