Anyone who has read the ‘This is Me‘ page will know that in the last year I discovered that the freshest sushi I’ve tasted in London is at Atari-ya in Hendon. Seriously it is the best sushi. So when my sister and a friend were looking for dinner places locally, it was one of the first places we thought of, given that I was craving sushi anyway.

However, unfortunately for my sister, she left booking a table to the last-minute (in Atari-ya terms) and attempted to get a table on a Thursday, for that Thursday. When a friend previously tried the same, he was promptly laughed at and told ‘you want table for Thursday? You book on Monday’.

Instead we ventured to Tosa, a neighbourhood restaurant in East Finchley. It was recommended by a friend of my sister’s and when I checked out the menu online, I was excited to see yakitori (grilled skewers) as well as sushi, perfectly in fitting with the ‘low carb’ diet I had adopted only days earlier. I was especially excited to see if the yakitori was anywhere as good as Bincho in Soho.

We pulled up at the restaurant and found parking quite easily, as we walked in we were welcomed by a waitress who seated us at our pre reserved table. For a Thursday night it was fairly quiet, there was only one other table of 4. Maybe the locals in East Finchley prefer to save their eating out for a Friday whilst those Hendon party animals take Thursday to be the first day of the weekend!

Within a few minutes of sitting down, our drinks orders were taken. We were then given a little too long to decide on our mains, in the end we managed to get the waitresses attention and place our order.

Duck Kamonegi – Duck is notoriously fatty, this was not only fatty but chewy too, none of us were overly impressed. 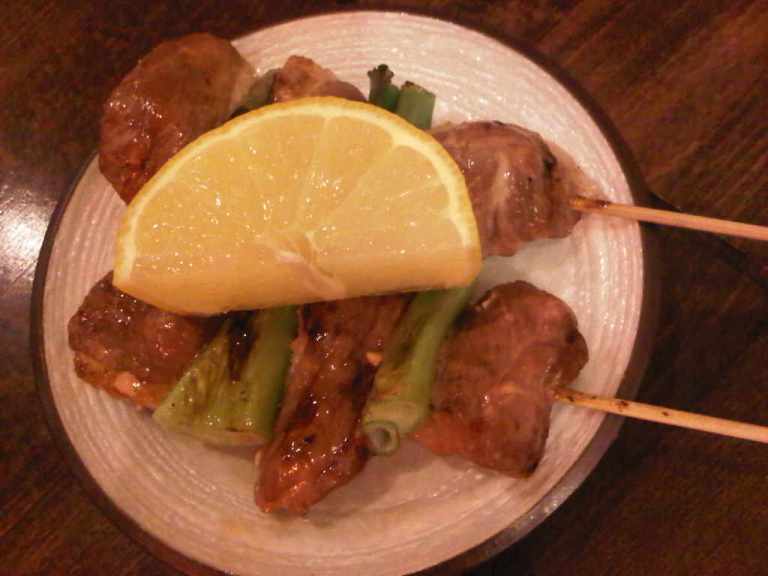 Shiitake – This was the grilled mushroom, I guess it was as good as could be.

Ebi Tempura Roll – This is something I think most sushi restaurants do well, I am yet to come across a bad one!

Maguru Sashimi – Tuna Sashimi – this was nice, I felt maybe it wasn’t as fresh as the tuna sashimi at Atari-ya but again, I’m not only biased but being a little picky too. My sister and Miss S were both quick happy with the tuna sashimi.

Unakyumaki – Eel and Cucumber Maki – This was a new one for me. The first time I tried sushi I was force-fed a California roll by my elder sister. I hated the taste of raw fish in my mouth and it took me several years to get over this fear. When I finally regained the confidence to give sushi another go, I was extremely picky about what I wished to try. Nothing ‘mushy’, no crab sticks and although I had never tried it, I decided to add Eel to that list. When this dish was ordered, Miss S described Eel as ‘sweet tasting’ and when it arrived, I gave it a quick taste. I have to say I was pleasantly surprised. Although I may not make it a regular on my sushi list, I will most definitely give it a go every so often! 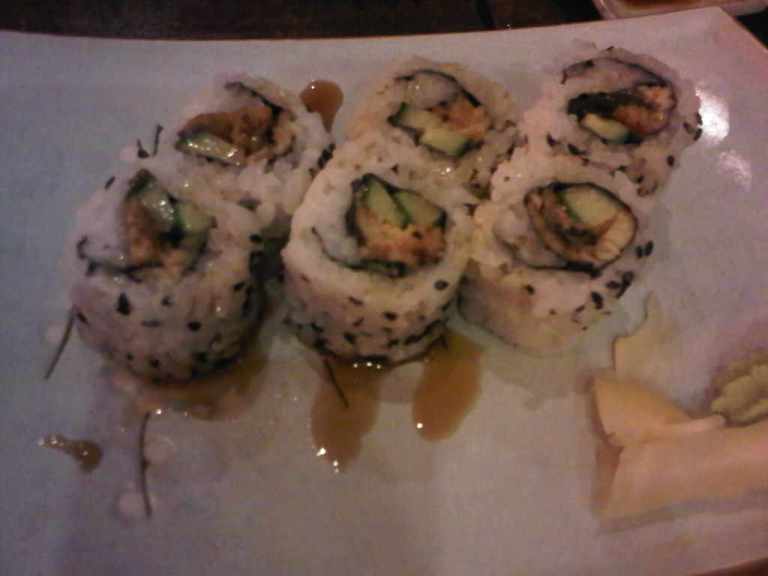 Spicy Tuna & Spicy Salmon Maki – Again I think these were mostly average, I didn’t find that they were particularly spicy, but pleasant all the same.

Gyutataki – Last to come was the rare beef salad. This took some time to come, but from the picture below you can see it was a fairly impressive looking dish for this neighbourhood restaurant. The Beef was good, although it didn’t particularly have that much flavour. It was served with soy sauce on a bed of lattice and red onion. Good, but not the best beef salad I had tasted. 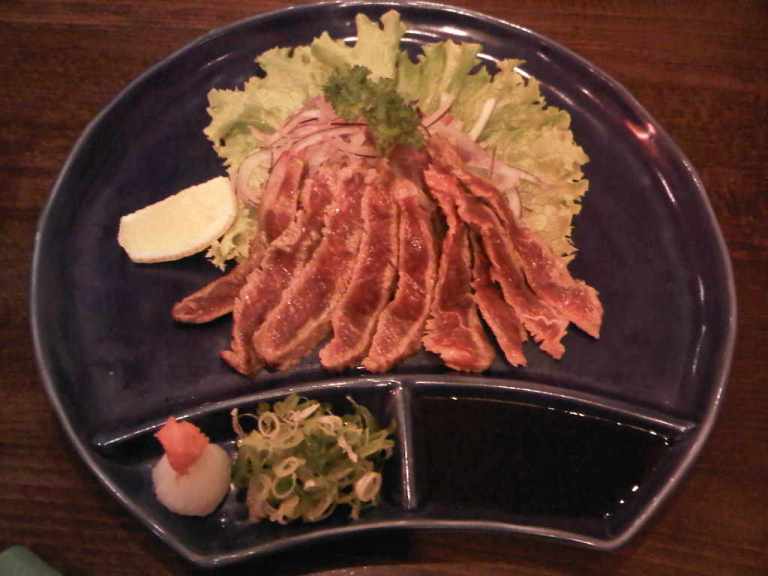 On the whole, the food wasn’t bad at all. Although I’ve probably sounded really negative throughout this post, I was only being honest and although I would go back, I wouldn’t feel the need to go back right away!

When you make big promises of cheese and wine.. #grazingplatter #festivebuffet #gamesnight #missdigressive #food #foodie #homecook #foodblogger
Would you believe me if I said this meal took just 30 mins to assemble aside from the time in the oven! Love that healthy eating doesn’t need to be a laborious task. #homecook #workingmum #colourfulmeal #colourfulfood #food #madebyme #missdigressive #foodporn #foodblogger #foodies
Today was our first day exploring the city and we indulged in a shed load of tapas at this super busy restaurant. The Jamon was amazing as were the croquettes, pan con tomate and the sangria. 👶 was fast asleep in his pram but the restaurant was super accommodating and gave us a nice table with space for the pram. They also gave us hot water so I could make up his bottle. This one gets busy so show up early for the shortest wait! #barcelona #tapas #cerveceriacatalana #barcelonafood #barcelonatapas #foodbarcelona #tapasbarcelona #jamoniberico #sangria #tapasrestaurant #tapasgalore
After a good few months we finally made it out on a Saturday night for date night. Given that I’m married to @hans_relwani, date night could only mean one thing, Chinese food! We went back to @goldmine.bayswater after nearly 3 years for the roast duck and char sui pork and they certainly didn’t let us down! #foodie #food #chinesefood #roastduck #charsuipork #londonfood #goldmine #bayswater #goldminebayswater #foodlondon #datenight #shaberlaber #instamymister
𝔹𝕝𝕒𝕟𝕔𝕙𝕖𝕥𝕥𝕖, 𝕊𝕠𝕙𝕠 On Sunday I had my first “Me” Day since Baby K was born. I had signed myself onto an Abstract embroidery lesson @teaandcrafting with the lovely @wildfloss and then for lunch. It’s amazing how your choice of restaurant changes when your only thinking of yourself. I happened across @blanchettelondon having passed it numerous times and thought I’d give it a go as soon as I saw their cheese and honey pairing menu! I went for the Spicy Cauliflower Beignets, Baba Ganoush and Pomegranate Molasses which was a really interesting combination and something I would recreate at home with a few tweaks, namely more garlic in the baba ganoush (but that’s a personal preference) and is roast or fry the actual cauliflower as within the crispy outer layer, the cauliflower was slightly hard! I also went for the Fourme d’Ambert (Cows’ Milk. Tender blue cheese with a fruity heart, Sarrasin Honey) Buckwheat flower, thicker texture like dark molasses with distinctive malty flavour. This was a delicious pairing, right up my street, my only gripe was that the board had been over salted and therefore this overpowered the honey and cheese combo! On the whole it was a delightful choice for a sunny day and because of the roadworks that have been going on forever on D’arbly Street, there was outside seating available! #Bonus! #foodblogger #eatingout #familyfood #bloggermama #foodie #missdigressive #londonblogger #londoneats #meday #selfcare #mentalhealthawareness #sohodining
ℝ𝕖𝕤𝕥𝕒𝕦𝕣𝕒𝕟𝕥 𝕆𝕦𝕣𝕤 A few weeks ago we had Sunday lunch @restaurant_ours. This was my lamb roast sans the Yorkshire pudding that was bought our separately. Truth be told the service was good, the staff were attentive and dealt with every request but I was slightly underwhelmed with the food. It was however very baby friendly. Step free access into the restaurant✔️ (but we were seated on a raised section) 👶 changing facilities ✔️ Offer to heat 🍼 ✖️ High Chair ✖️ #food #foodlondon #sundaylunch #roastdinner #foodblogger #eatingout #familyfood #bloggermama #foodie #missdigressive #londonblogger #londoneats #restaurantours